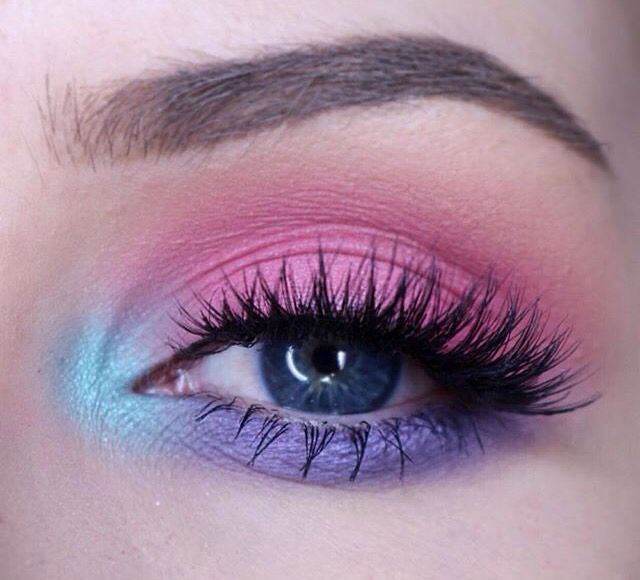 My daughter and I were going through some photos on Pinterest, I had just made the account, and they had some suggested content on my home page. We saw a few makeup pictures, she really liked this one, and said I should try it out. I liked how simple it was, and she was so excited, so I did it.

My Eyelid on my left has a scar above it, which makes me eyelid super crinkle. I basically have a double lid almost. It is weird, but I have been that way since a child. Gots to deal.

I didn’t try to match the colours exactly, I’m not much a fan of barbie pinks, so I used a more orange pink. I also used a brighter purple and put some silver in my tear ducts with the blue. I have a bit of dual shifting eyeshadow under my eyebrow too.

First time trying the L.A. Colors eyeliner. I think I reacted to it, cause after I put it on, I started tearing a lot. All the eyeliners were waterproof, so luckily there was no budget over the day, and my eyes eventually stopped. First time with the Gosh liner too, it is super creamy, love it. I also found many palettes on the web of old stock for the Revlon Eyeshadow Cremes, so while I didn’t find the Vintage Chic, there was many others. I love the formula, and it still hasn’t dried after all these years(one is at least 10 years old, I own like 4 of them, still act as the day I bought them).

So this was a fun day, makeup wise. I have so many colours in that palette, so it was fun using some I hadn’t previously.